I finished my bi-monthly KAL socks in good time before the end of the month. 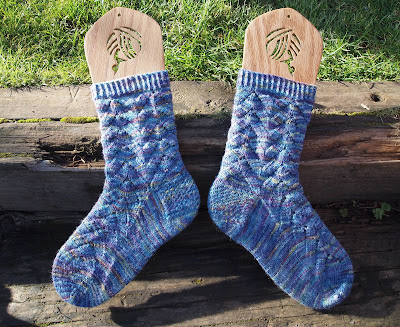 The ever popular Monkeys by Cookie A. No-purl version and an eye of partridge heel. Just in case anyone wanted to know this is the stitch pattern

It makes the finished fabric that little bit more cushioned on the heel, plus I think it's a little harder wearing too. I don't tend to wear my socks through but I like the extra squidge 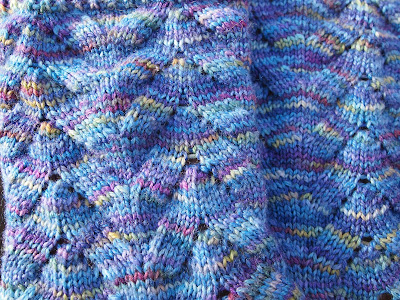 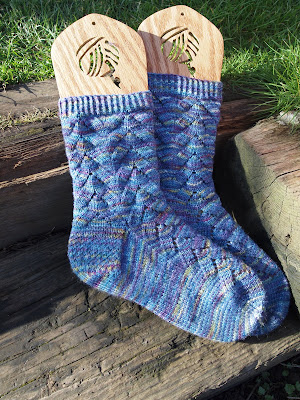 I have already cast on for my next pair in the KAL - socks with owls on!

I am woefully short on handknit socks, last count 2 pairs - one knit by me and the other by Karen (thank you Karen) so when a year long knit-a-long was mentioned at my LYS the fabulous Knitting Hut I immediatley said yes.

We read lots of sock books and looked at a million sock patterns, then voted in six categories for the socks we want to knit this year. We finally settled on these six. 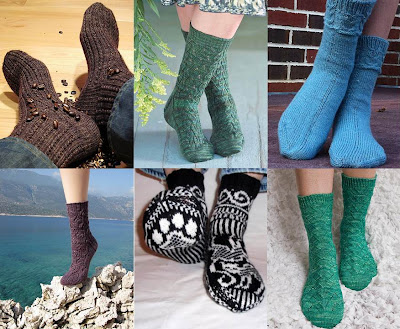 Due to the voting there wrere two draws for first place so we can choose which to knit.
Instead of Java - Francie, instead of Almondine - Van dyke
We have picked the Monkey as our first sock (we met over champagne just after new year to decide) the descision was based on the fact that it is a quick and easy sock. I have knit a pair of monkeys before plus one loan monkey which never had a mate (maybe I should finish that pair too!) so I wanted to make it a little more interesting. I chose to knit n0-purl monkeys and subsituted an eye of partridge slip stitch heel.

We are all knitting with different yarn as well so that we use up stash. I cast on with Pagewood Farms Yukon sock yarn (merino/bamboo/nylon mix) in Sky Blue Pink colour way 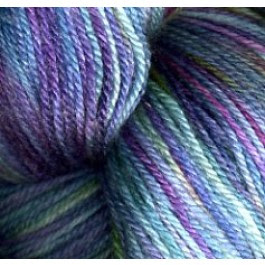 It looked colourful but not too much in the skein, but now I am knitting it I can see that it's a bit too bright for me generally, too many different colours. 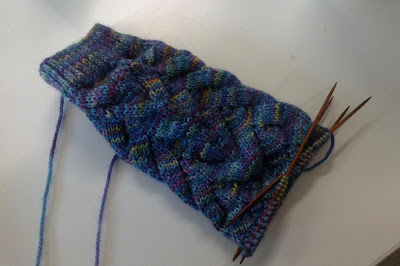 I suppose I could overdye them when finished but it's only socks - nobody will know when they are in shoes! The yarn itself is very soft and has a sheen from the bamboo, it is slightly splitty and I should change needles to a blunter set but I really like the feel on these ones (Lantern Moon sox stix in rosewood) 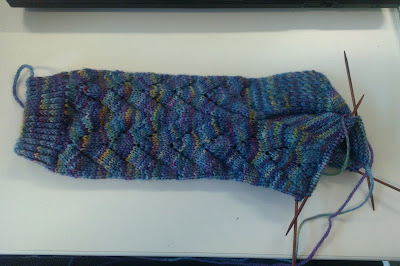 If you would like to join the knit-a-longs, please join the group on Ravelry.

This years winter sweater for my godson 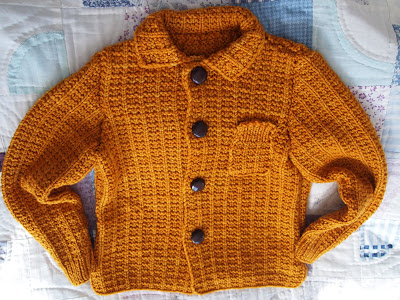 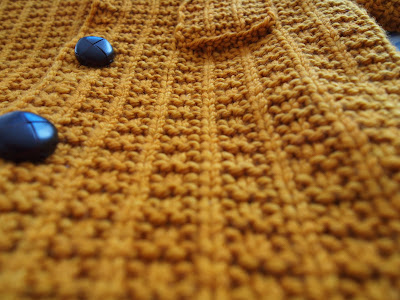 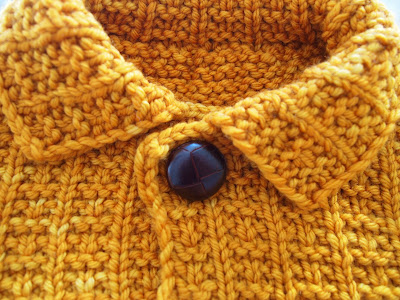 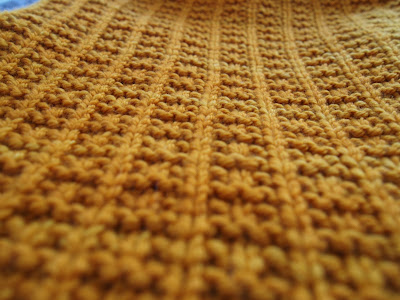 A few snaps from my visit to Wonderwool Wales, mum and I drove to Wales and stayed in a youth hostel near Pen Y Fan. We stayed there last year too but had a room to ourselves, but this year was the start of the school holidays and the hostel was very busy. Sharing a room with nine others is something I got over years ago, so I won't be doing that again!

This is the view that greeted us at the show ground, the day was very warm and sunny. 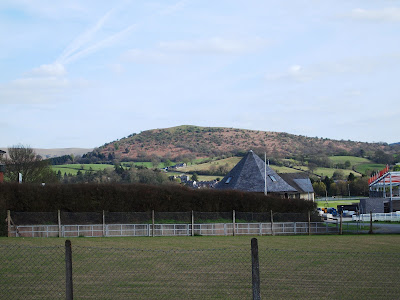 Some of the sheepy participants in the show: 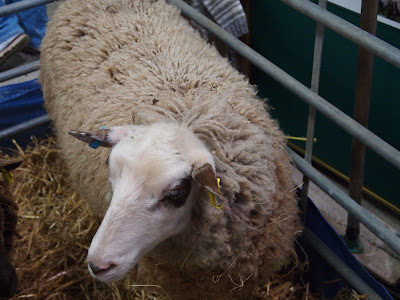 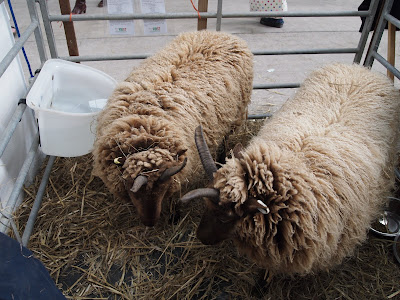 Longwool Ram, he was very hot and panting in the warm weather, his dreadlocks are brilliant, I am sad Ididn't buy any coloured longwool but I am not so fond of it when spun. 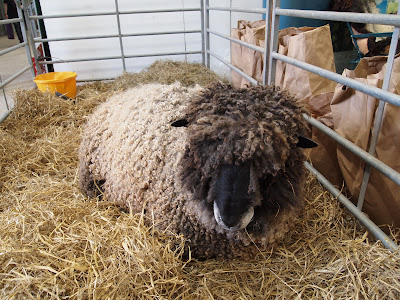 I purchased a couple of things, a Shetland fleece from the coloured sheep stall. Hopefully it will be good for my class during this summers Knitnation , I am very excited to have signed up for some classes including spinning Shetland fleece for lace with Judith Mackenzie McCuin.

They also had this super cute sheep farm, each one is knitted from the yarn made from the fleece of that breed (not sure if the sheep dog is made from doggie yarn though!). 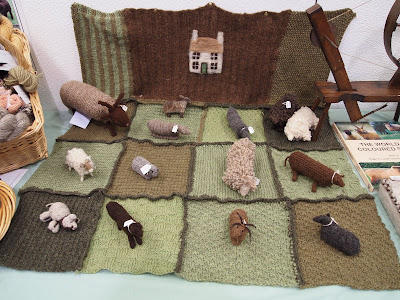 I also bought some gorgeous grey alpaca from this stall, the fleece is from an Alpaca named Gelert, my Welsh cousins had a dog of the same famous name so I could not resist. 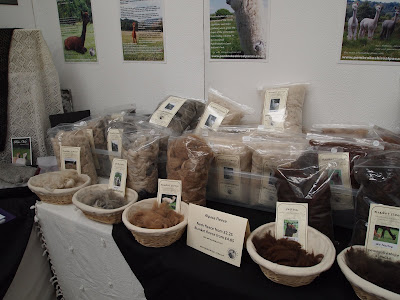 Just because I haven't posted doesn't mean I have been sitting on my hands. I finally finished spinning this handspun for a sweater, I've been plotting what the sweater/cardi should look like and have cast on. 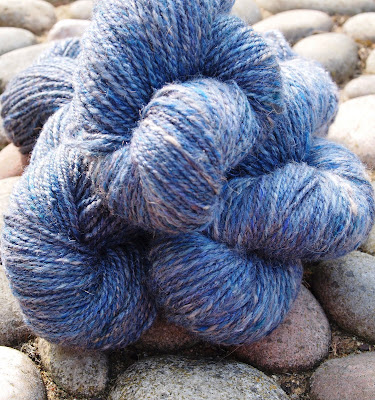 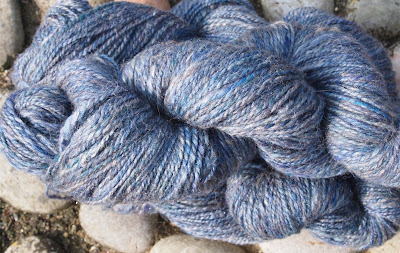 The fibre is from Felt Studio and is a glorious mishmash of fibres (merino, silk, camel, angelina) and colours (blue, silver, azure, purple), the overall effect is a heathery silver blue with subtle sparkle and tweedy highlights. 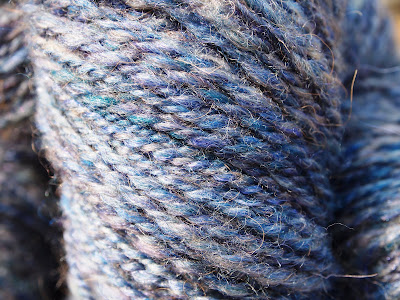 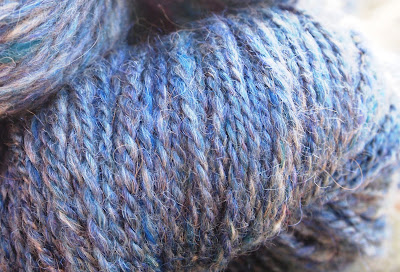 Not the most even spinning - batts make for texture. I am knitting it from two balls at a time to try and even the tension out somewhat, lets see what happens!
Posted by Bekky at 12:34 2 comments:

A Budgie with the muddy blues

I have wanted to make a Budgie sweater since Grumperina released the pattern, her blog is a favourite of mine and I read it almost every day.

This was also a serendipitous coming together of yarn and pattern, I have had the multi coloured 'mud season' yarn from Spunky Eclectic club since March 2008. I had tried to knit a pair of socks but the colours overwhelmed the pattern and the yarn is sports weight so the sock was thicker than I like. However using it in stripes enables the colours to really show up beautifully and not become too much.

The turquoise yarn is a Rowan RYC Cashsoft 4ply, I wanted to use this colour but it only came in 4ply which was very thin. I ended up using the yarn double so it is thicker than the sports but actually that makes these stripes pop a little more and I really like how is looks. 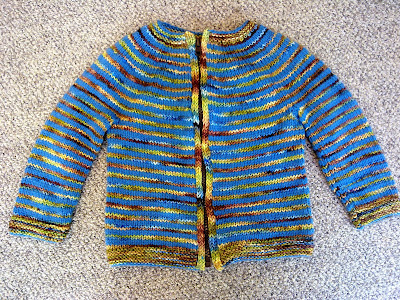 The pattern is really well written with excellent tips on the best way to sew up the sleeve seams to keep the stripes even and how to shorten the zip to fit. 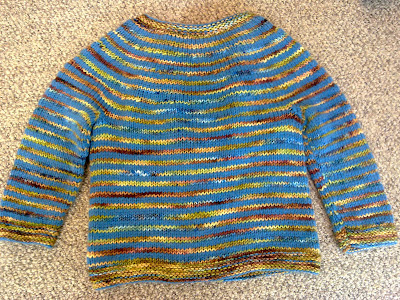 I love the way the stripes curve round the yoke, so did everyone in the office - I have requests for 4 more! 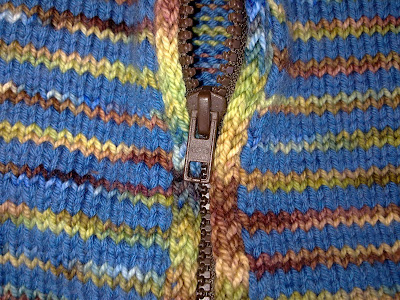 My favourite part is the icord in the mud season colour that you sew the zip into. I think the colours almost look like the pictures of the earth from outer space. 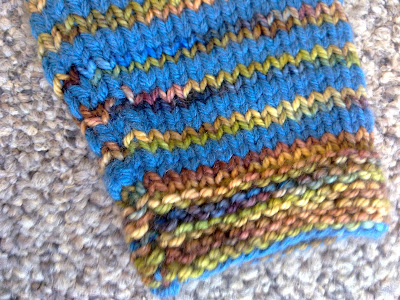 The carpet is the office one - hence why it is so ugly, I didn't manage to take any pictures at home.

The recipient of this garment is not the usual person (my godson) but the son of a good friend from work. When Aiden was born, I knitted a cute little top for him and when his mum, Bev, came back to work she said how much she loved it and would I knit him something else, now he had outgrown it. Who could resist such knitting flattery? I started this some time ago and then snapped the needle I was using, I put it away in disgust. Over the weekend I went through my stash and WiPs and pulled a few out, this was amongst them. It only needed one icord edge, seams and a zip to be finished, so I got it done - very satisfying!

There is a Ravelry group called 10 in 2010 which means knitting 10 shawls this year, I decided to join and even though I may not knit 10 it is great to join in and see everybody elses efforts, I have discovered some great new patterns this way. I have not posted my first shawl, so here we go.

This is Seraphim by Miriam Felton, it a great intuitive pattern to knit, I really enjoyed knitting it and have worn it a great deal.

The yarn is Opulence from the Woolen Rabbit in Stormy. I can't say enough good things about Kim from the Woolen Rabbit - great customer service and a genuinely lovely person, her yarn is pretty fabulous too. The muted, subtle colourways are gorgeous and the all the yarns I have used have been great to knit with, Opulence is a silk/merino mix and feels almost cool to the touch but keeps you lovely and toasty warm. 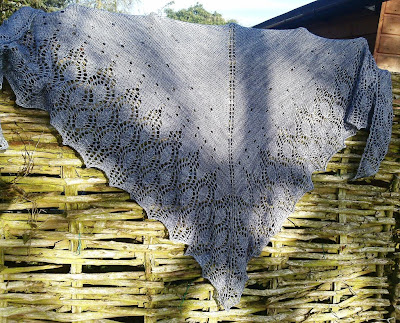 I really like how the plain section at the top of the shawl gradually become more patterned, no harsh break between stockinette and lace sections 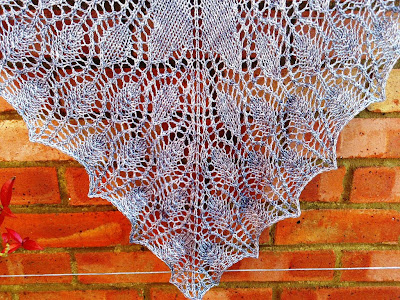 I love the feather pattern here, they flow beautifully into each other. 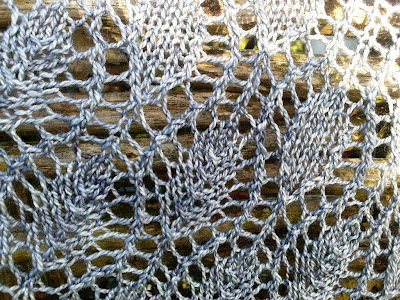